If you’ve been following my Instagram stories or you have me on snapchat, You’ll know I used Hello Fresh for the first time last week. I was very much looking forward to this because I’ve heard ah-mazing things about it. My experience with Blue Apron was meh at best, so I was really hoping this would be better.

For my first meal, I chose an arugula salad with artichokes, olives, potatoes, feta and tomatoes with a mayonnaise based sauce. It took almost no time to cook and oh my goodness was it good. I’ve never been a huge fan of feta especially when you compare it to other cheeses, but when you put it in a salad it really makes a difference. I do try to stay away from dairy and the like, but this really made the salad for me. 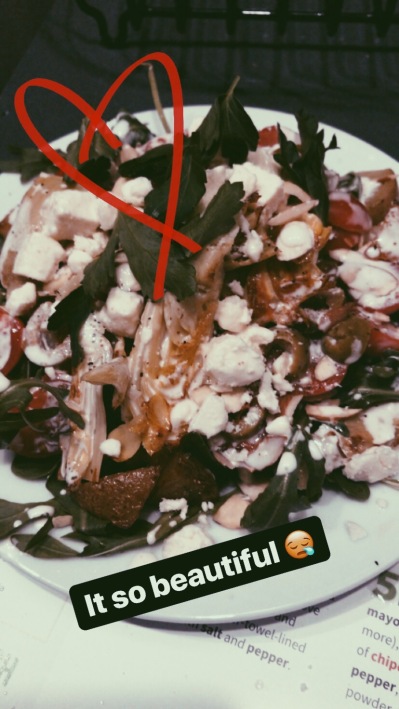 Little known fact about me: I absolutely love artichoke. I don’t have it very often (I can’t say why really) but I am definitely going to start eating it more often because I sort of forgot about my love for it. This was all around amazing and I kept the recipe so that I could make it myself later! P.S. actually salivating right now remembering how good this one was LOL

The next meal went slightly awry, unfortunately. I decided on sweet potato pita pockets with avocado and a cucumber salad with dill. I can not stand cucumber, but I went into it hopeful that dill would somehow make it taste better?

I was sadly mistaken. Cucumber is just not good people. They were only meant for relaxation eye patches, okay?! The pita pockets were good, however they forgot to include the mayonnaise so I couldn’t make the sauce to go with it. I felt they were a little too heavily carb-y. I love bread and potatoes, don’t get me wrong, but it was just kind of a lot when put together with nothing else besides avocado to go with it. Still good, but I was let down a bit.

By the last meal, I just wanted a pizza. Granted it was a Saturday and really who wants to cook on the weekends? Also this recipe looked the weirdest and took the longest to cook. It was farro-based with asparagus zucchini onion and walnuts. This really wasn’t as bad as I was thinking it would be. There was soon much extra farro with this one which meant again it was a little heavy.

Overall I liked this MUCH better than Blue Apron. The meals mostly had things I’ve tried before that I wouldn’t think to put together that were mazing combinations. Would I recommend? Yes. Will I be doing this again? Yes! but only about once a month cause it ain’t cheap.

Some definite cons you should know about:

Their delivery service they use is weird af. My package got delivered to a random building next to me because they I guess could find the door to my place. Thankfully the person didn’t steal my stuff

The fact that they forgot the mayonnaise was really annoying. The sauce might have made the meal better

All of these meals included something potato or grain related. I get that its meant to be filling or whatever but like just one meal could’ve been done without any of that stuff. I find that bread really bloats me so it was mildly irritating.

Also so much mayo?? Two recipes required a mayo based sauce which I found odd. Couldn’t they have come up with abetter substitute? Mayo is definitely not healthy.

I feel like, because I picked recipes that didn’t have meant, they felt they needed to either add cheese or bread in order to make up for it in a way. I think the misconception among the vegetarian world as that because meat isn’t a part of the diet, that we should substitute it with obnoxious amounts of bread and cheese. Honestly, I would love it if they would try a more vegan approach. Just because I opted out of meat, doesn’t mean I need rice and potatoes for every meal.

One of the things I’ve always wanted to try but never did are those weekly food deliver meal kit things (idk what the real term is). I almost did last year and then they wouldn’t send it to me because my roomie had already done it and they were like girl you been caught. So I never went through with it. One of my resolutions was to stop spending money on clothes and junk food, which sounds so easy but I love clothes and candy is life so its NOT. This was my way of “treating myself” to some healthy means for a decent price! A win-win!

So I received my lil box on Sunday and I was pummpppeeddd to try this stuff cause it looked damn good. I decided to start on Monday to do my week right, ya know.

It started out okay….

Then everything was not okay… 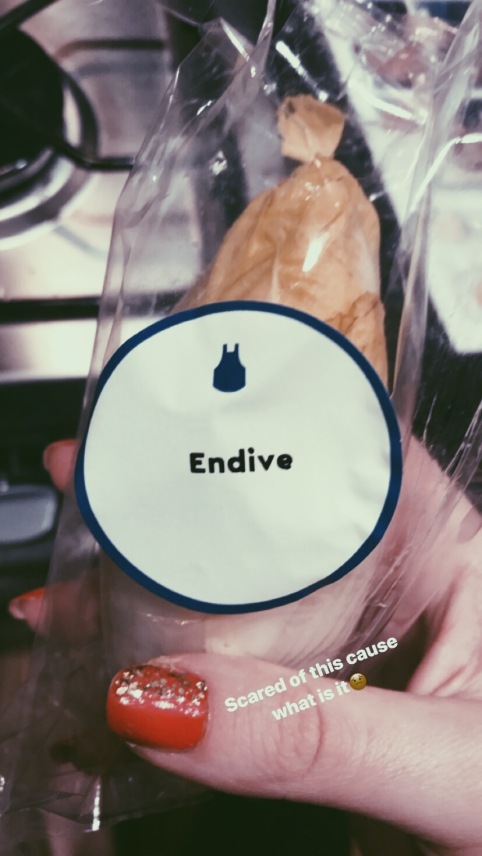 Maybe it was just me dilly-dally-ing but this shit took me an hour to cook, so I didn’t eat until after 8 and guess who woke up twice during the night with what can only be described as pizza sweats. If you don’t know what pizza sweats are then I’m sorry you’ve never drunkenly eaten pizza and then gone right to sleep and you don’t know what living really is. Let’s be real they call it “flatbread” but its just a fancy word for “thinnish pizza.” The salad was the grossest thing ever, no idea what an endive is but its is horrible. Just leave it in the ground where it belongs if you ask me cause it is not for humans.

The next meal I made on Wednesday and lemme tell you by then I was very discouraged, didn’t even document it and made pasta just in case it was gross and/or took too long. I finished it in a decent amount of time and this one was DAMN GOOD. So good that I really would even make it again cause it had so many veggies and kale with so much flavor I would never even think to put together! It really restored my faith and was even really good the next day I was so impressed.

By my last meal on Friday I was feelin’ like this:

But it was my last one and it was tacos and potatoes so it had to be good right?

The meat part really sketched me out because it was pork, the sketchiest of the meats. Also the directions called for a lot of water while I was cooking the meat?? I’ve never made ground meat so this was all weird for me. The tacos included radishes which lemme tell you are the grossest things ever. They had this weird bitter after taste and I am not about it. After eating I felt kinda gross and the only upside was that the potatoes were amazing, but like obviously.

Overall, I wasn’t impressed. This could be better maybe if I ate meat, but since I try to cut it out wherever I can’t, this really wasn’t for me. If I had gotten more meals like the Cauliflower Kale one, it would’ve been great. Next up I’m trying Hello Fresh!!!! Lets compare and see which one is better shall we?