DISCLAIMER:  I’m not coming for people with tiny boobs. We’re all given a certain amount and we may increase or decrease to our leisure, if you’re willing to pay for it. I would also like to point out that it is 10000X easier to add boob (pushup bra) than take boob away (there’s no “take boob away” bra).

However, when it comes to fashion lately, smaller boobs are more “stylish”. I can think of so many times where I’ve said, I can’t wear that because I have big boobs. I recently watched a IGTV video from an unnamed magazine company where they talked about trends for fall or things that they’re loving as far as clothes go. I would say about half of the things we’re very specifically tailored to people with absolutely nothing up top.

It seems that we always want to add more boob, but in clothing lately it’s trendy to just not have any boobs at all. Here’s some examples: 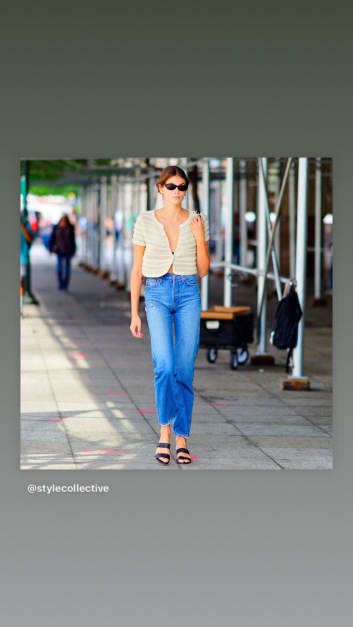 Sweaters with just one button to close it, cute! On me? Suggestive.

Imagine trying to wear a bra with this–comical. 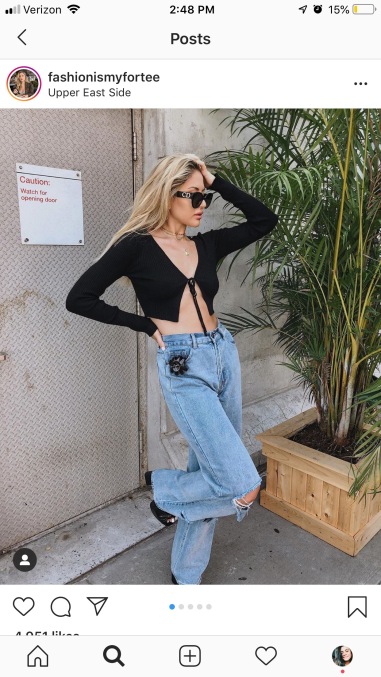 The trend here seems to be tiny strings to hold your top closed. God forbid your boobs fall with gravity and aren’t inline with your eyeballs.

This started trending on Instagram as everyone saying, “look at Katie Holmes being an influencer! So chic!” Instead of how it would be framed if she had my body which would be, “Katie Holmes wardrobe malfunction! Seems a little sloppy.” 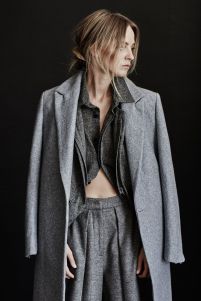 Another trend I’d like to point out is the androgynous dressing, which basically means baggy-suit-wear-so-you-look-like-a-guy. A little easier to pull off, but I’m definitely still gonna look like a girl.

Without getting preachy or talking about something I very much don’t know anything about, this is part of larger issue with fashion. Everything is always made for people of a certain body type and looks wonky on anyone that doesn’t look like that. That’s why it’s cool that some brands now show you the same article of clothing on different body types.  But of course, high fashion and trends really aren’t there yet. Anyone who isn’t rail thin really isn’t considered in designing clothes, it’s always just made bigger in order to fit more bodies. And “thats the tea”, on that.